From the Beryl Coronet to Vimy Ridge 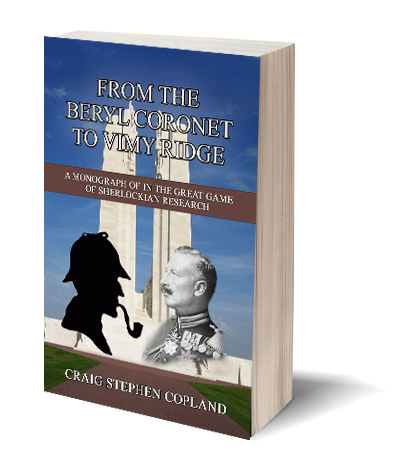 From the Beryl Coronet to Vimy Ridge

Could Sherlock Holmes have prevented World War I? Was there something he might have done … could have done that was the ‘sine qua non’ without which the war might never have started. This new mongraph in the Great Game of Sherlockian scholarship argues that there was such a Sherlock Holmes factor … and that it is secretly revealed in the ‘roman a clef’ story that we know as ‘The Adventure of the Beryl Coronet’.  One hundred years ago, the world was engulfed in the greatest, most horrible series of battles ever known – World War One. If you are interested in that period of history AND a devotee of Sherlockian scholarship, you will enjoy this enlightening monograph. Get it NOW and follow the irrefutable logic.