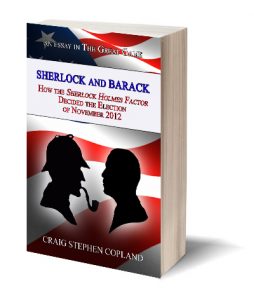 This is NOT a new Sherlock Holmes Mystery. It is a Sherlockian research paper seeking answers to some very serious questions. Why did Barack Obama win in November 2012? Why did Mitt Romney lose? Pundits and political scientists have offered countless reasons. This book reveals the real reason – The Sherlock Holmes Factor. Had it not been for Sherlock Holmes, Mitt Romney would be president. This study is the first entry by Sherlockian Craig Stephen Copland into the Grand Game of amateur analysis of the canon of Sherlock Holmes stories, and their effect on western civilization. Sherlockians will enjoy the logical deductions that lead to the inevitable conclusions. A full copy of A Study in Scarlet, the story responsible for the November 2012 Sherlock Holmes Factor, is included in this book so that novice readers may confront the evidence and decide for themselves.