The Return of Napoleon 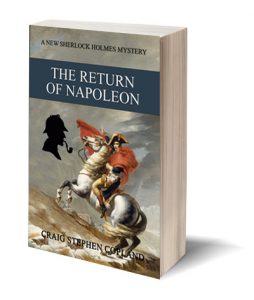 The Return of Napoleon


In October 1805, Napoleon’s fleet was defeated in the battle of Trafalgar. Now his ghost has returned to England for the centenary of the battle, intent on wreaking revenge on the descendants of Admiral Horatio Nelson and all of England.
The mother of the great-great-grandchildren of Admiral Nelson contacts Sherlock Holmes and asks him to come to her home, Victory Manor, in Gravesend to protect the Nelson Collection. The invaluable collection of artifacts is to be displayed during the one-hundredth anniversary celebrations of the Battle of Trafalgar. First, Dr. Watson comes to the manor and he meets not only the lovely children but also finds that something apparently supernatural is going on. Holmes assumes that some mad Frenchmen, intent on avenging Napoleon, are conspiring to wreak havoc on England and possibly threatening the children. Watson believes that something terrifying and occult may be at work. Neither are prepared for the true target of the Napoleonists, or of the Emperor’s ghost.Another new story of Sherlock Holmes for readers who love The Canon, and English history, and who will forgive an element of the spine-tingling supernatural.