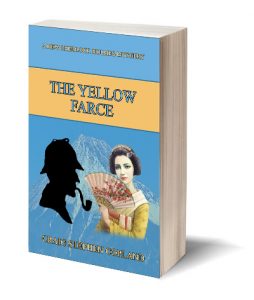 It is the spring of 1906. Sherlock Holmes is sent by his brother, Mycroft, to Japan. The war between Russia and Japan is raging. Alliances between countries in these years before World War I are fragile and any misstep could plunge the world into Armageddon. The Empire is officially neutral and wants to stay that way. But an American diplomat has been murdered and a British one has disappeared. The wife of the British ambassador is suspected of being a Russian agent, and of having an affair with another Russian agent.

Sherlock Holmes has many fans in Japan, some of whom may be spies. He is called upon to be the honoured presented of the prizes for three great athletic races, the final one being one of the most demanding challenges anywhere in the world.

Join Holmes and Watson as they travel around the world. They have a couple of interesting stops on route before they even get to the land of the rising sun. Once there, they encounter an inscrutable culture, have to solve the mystery, and maybe even save the life of the Emperor.

It’s a fun read and is inspired by the original Sherlock Holmes story, The Yellow Face. There is a bit more travel adventure than in most New Sherlock Holmes mysteries, but what would you expect if they have to go all the way to Japan?  Available now by clicking and buying. Enjoy.